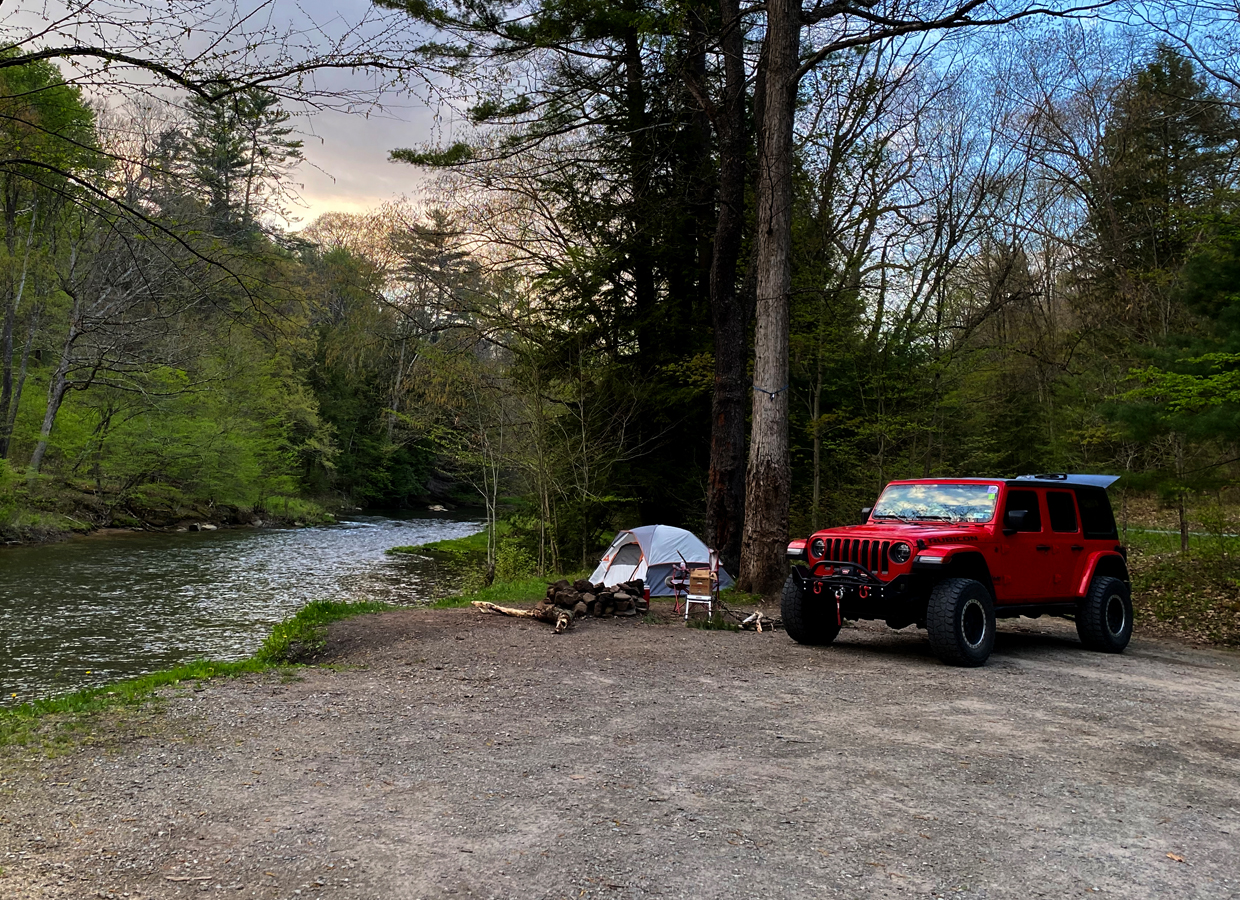 Finished crossing the flat lands of the midwest, reaching mountains again in Pennsylvania, firmly “back east.” The lush green landscapes seem almost shocking after so long a stretch exploring the arid spaces of the west, but there is also something comforting about returning to familiar environments, and as I got closer to home I “bee-lined” it. Hit the customary traffic as I neared New York City, and then the final bridge to Long Island, and happy to be back home! (Click through the images below for each day’s notes)… 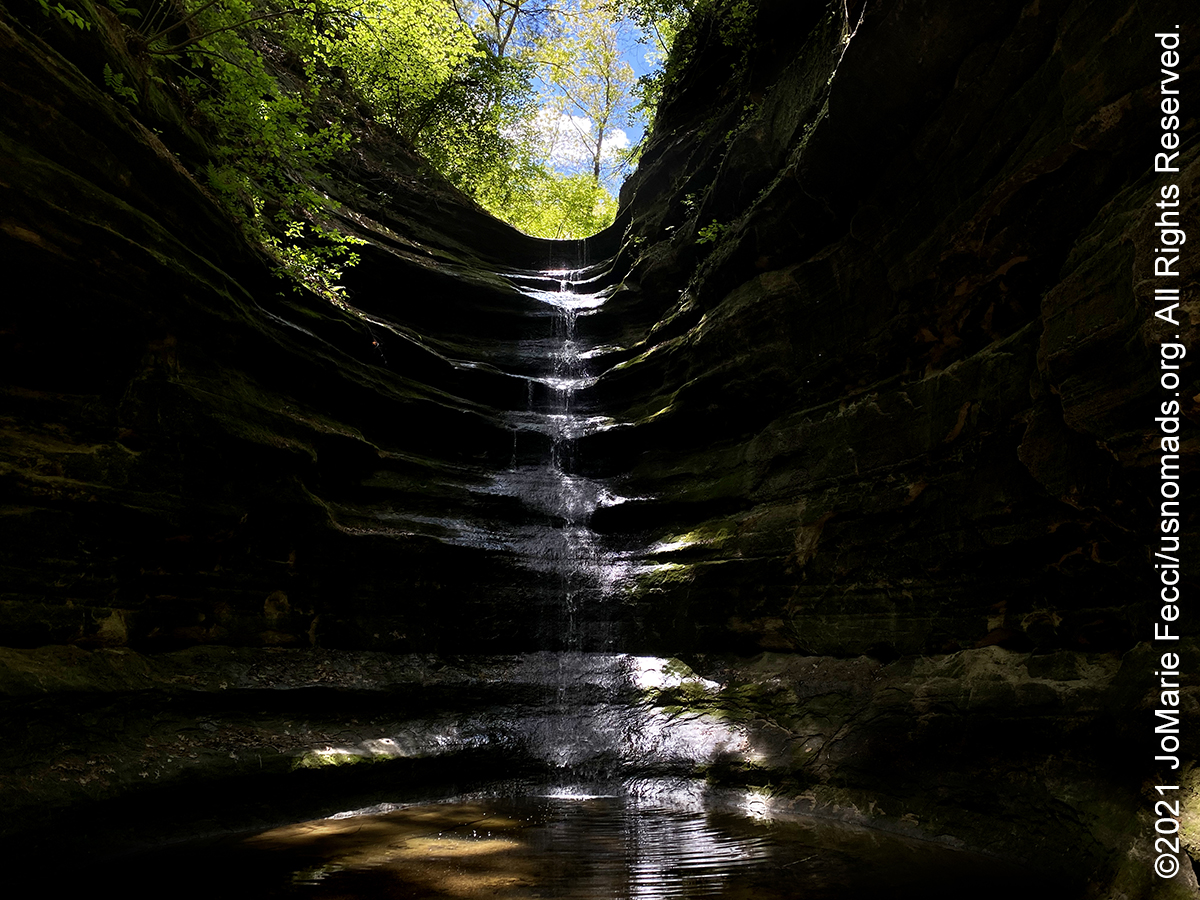 Day 97: IA to IL to IN
Wildcat Den, Starved Rock and Indiana Dunes... 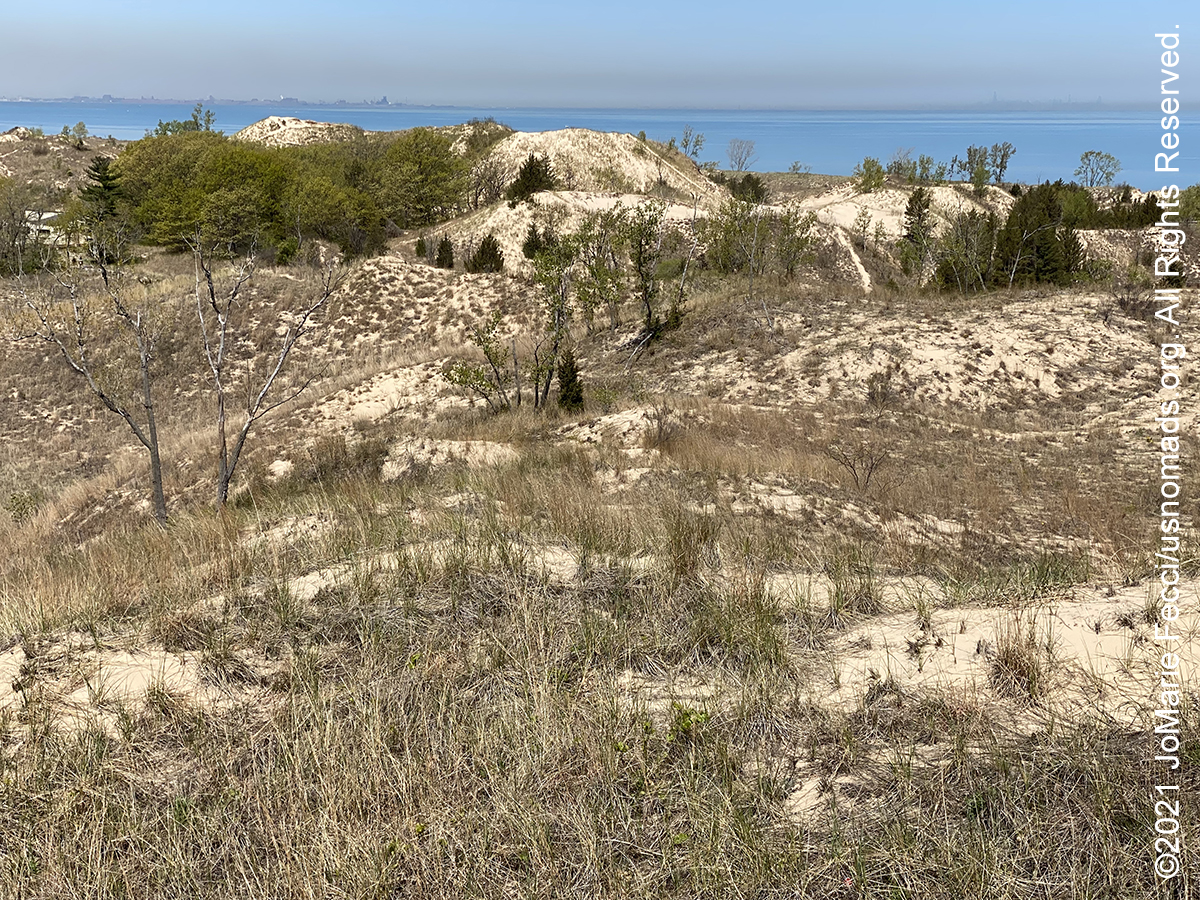 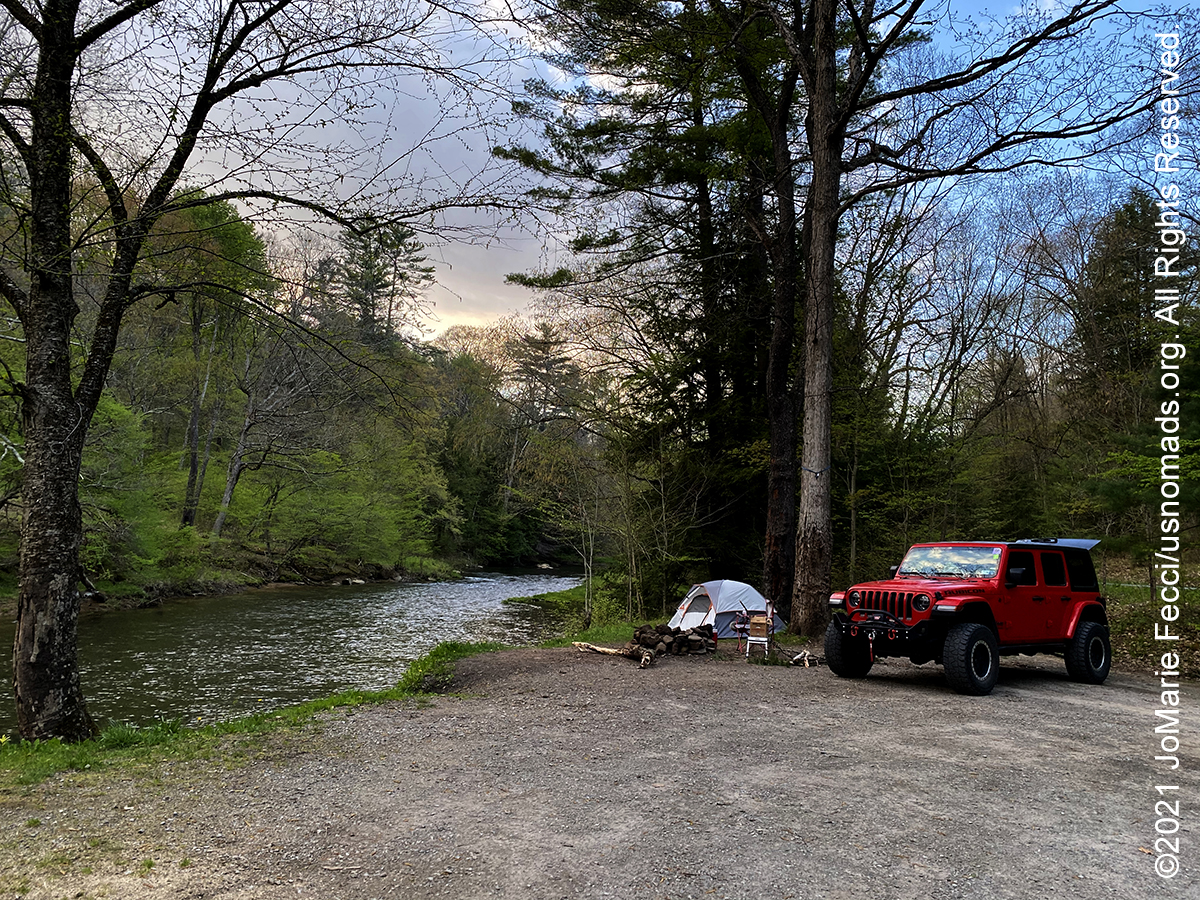 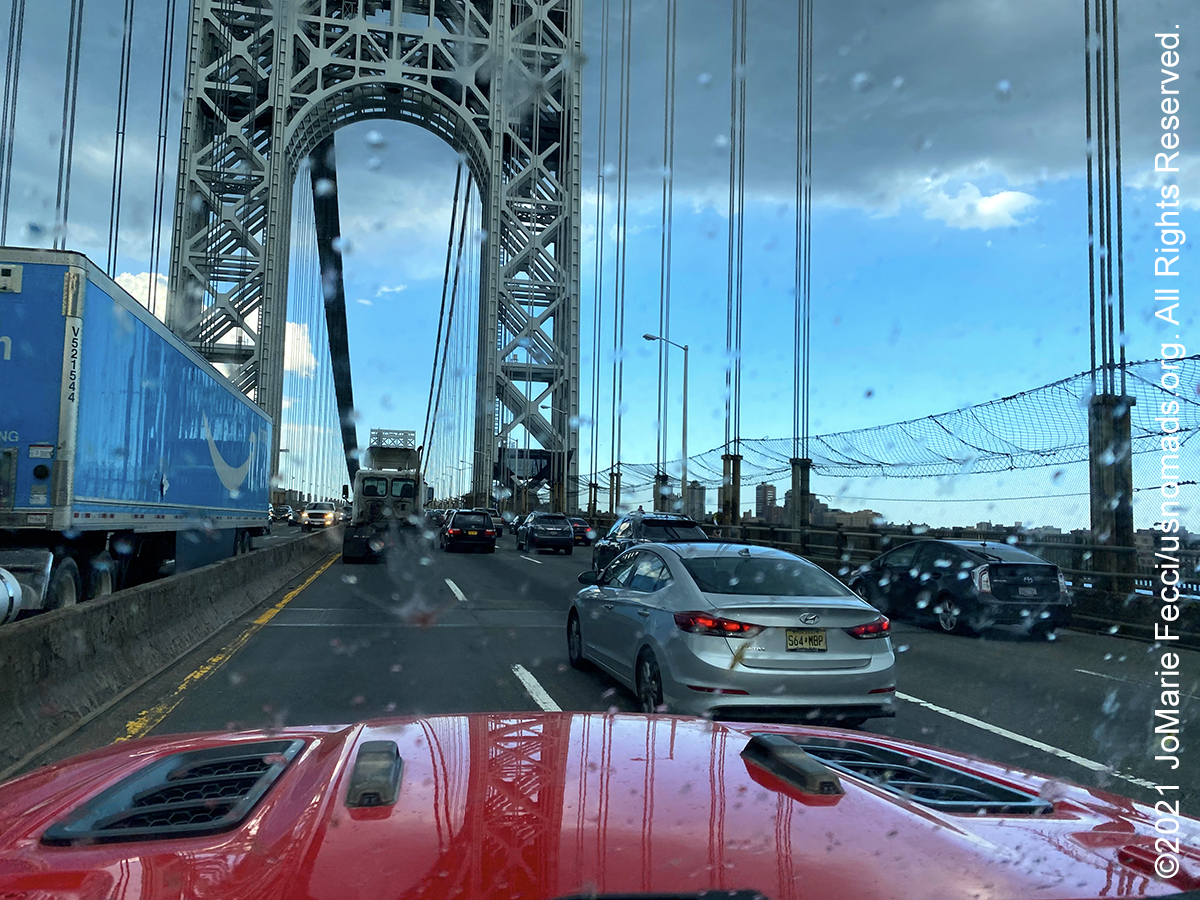 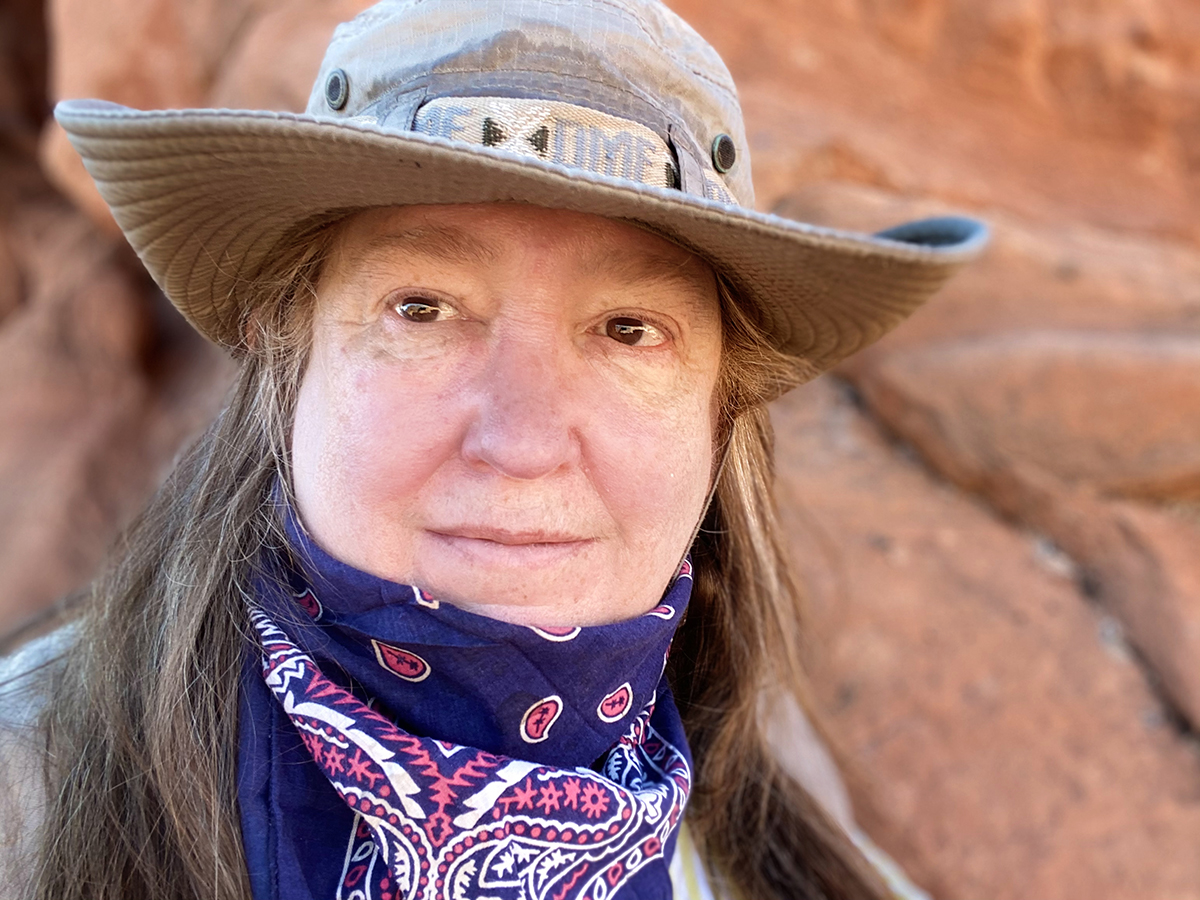 Postscript
A few final thoughts on the journey... 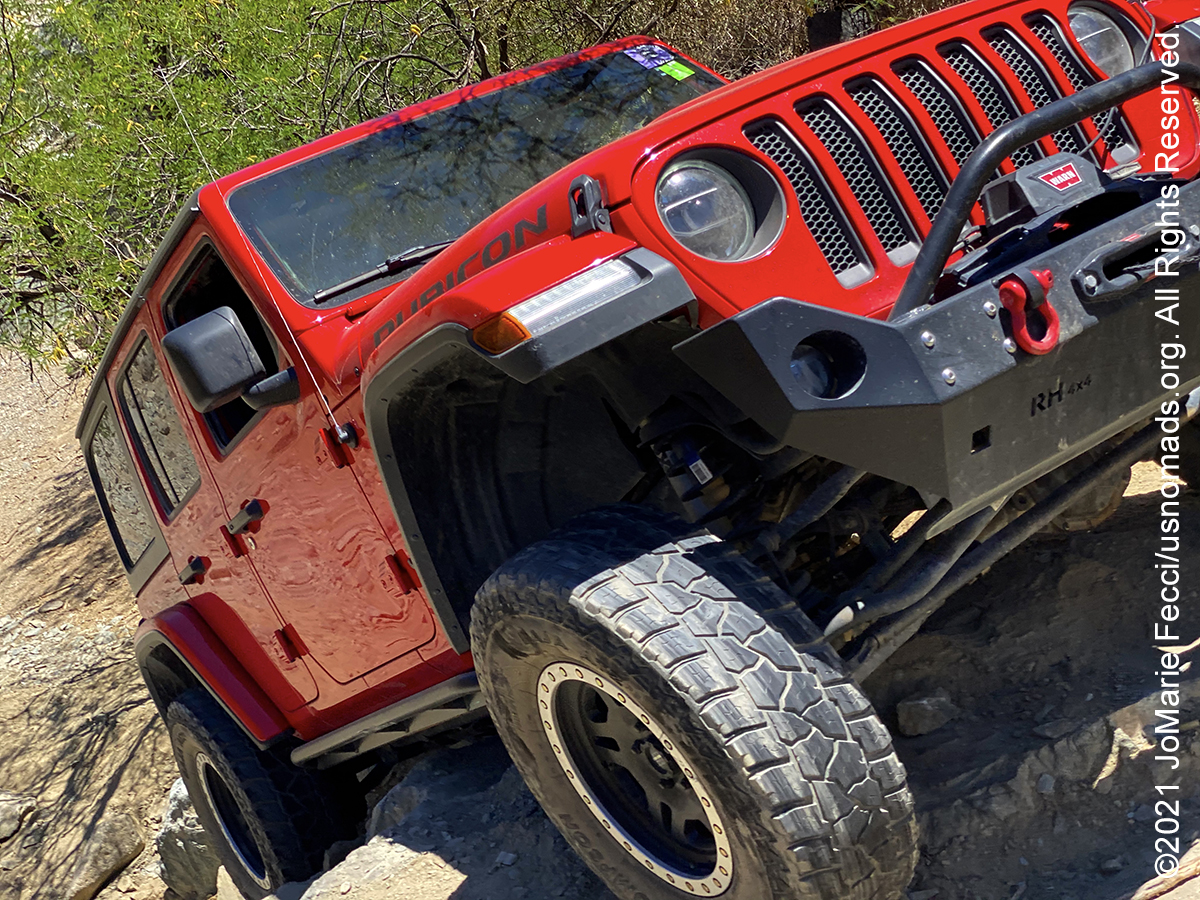 Note this map provides an overview of the twelfth segment of the journey–from Iowa across Illinois, Indiana, Ohio, Pennsylvania and New Jersey to Long Island, New York. The route on this map shows the overall direction of travel and key “stops” but does not include any detailed GPX tracks for backcountry trails, etc…

Wildcat Den State Park in Muscatine, Iowa is one of the state’s most photographed parks. Combining natural beauty and solitude, unique trails,
preservation of historical structures, and picnic areas for recreational use, Wildcat Den State Park is also one of the most unique parks in Iowa. Trails wind through a variety of terrain, leading to geological formations such as “Steamboat Rock” and the “Devil’s Punch Bowl” along wooded bluffs. The majestic cliffs are composed of 300 million year-old sandstone and provide spectacular views for hikers.The “turn of the century” Melpine one-room schoolhouse offers a glimpse into Iowa’s past. And the Pine Creek Grist Mill, the oldest working grist mill between the Mississippi River and the Rocky Mountains, is one of the finest examples of mid-19th century mills left in the country. The mill was built in 1848 built by Benjamin Nye, one of Muscatine County’s first settlers. The mill is being restored to its original condition. and is now grinding corn for the first time in more than 75 years.

Starved Rock State Park is located just southeast of the village of Utica, Illinois, along the south bank of the Illinois River. The park has over 13 miles of hiking trails with 18 deep canyons, some of which feature dramatic waterfalls. The unique topography was created by a catastrophic flood from a melting glacier, approximately 14,000-17,000 years ago before humans occupied the area. The flood exposed the rock canyons which are very unusual for the central plains area. Starved Rock is named for a prominent sandstone butte that overlooks the river, where according to local legend, a group of Native Americans of the Illinois Confederation had fled under attack by the Ottawa and Potawatomi who besieged the butte until all of the Illiniwek had starved. The area around The Rock was designated a National Historic Landmark in 1960.

The Indiana Dunes National Park, located in northwestern Indiana, runs for about 20 miles along the southern shore of Lake Michigan.Over 10,000 years ago, glaciers receded north, leaving rolling hills, wetlands, Lake Michigan, and the dunes ridgeline. Shaped by the glacial events and changing climates, the dunes landscape contains disjunct flora representative of eastern deciduous forests, boreal forest remnants, and species with Atlantic coast affinities. In the early 1900s most of the coastline has been settled for use as homes, factories, and businesses and the dunes became threatened by the encroaching real-estate development. An American intellectual, nonconformist, and free spirit, Alice Mabel Gray had been living in a crude shack along Indiana’s wild Lake Michigan shore and became interested in the history, ecology, and the need to preserve the area’s dunes. Later known as “Diana of the Dunes” she had trained in mathematics, astronomy, and classical languages at the University of Chicago in the early 1900s before rejecting a wage-earning, urban life in favor a solitary existence at the Indiana Dunes. Gray’s unconventional lifestyle fascinated the general public and area news reporters, who gave her the “Diana” moniker. Gray’s notoriety and the “Diana” legend brought media attention to the Dunes at an important time when the local community’s support was critical in helping to establish the area as a nature preserve that became the Indiana Dunes State Park and later Indiana Dunes National Park. Today visitors to the National Park can take the “Diana Dunes Dare” a hiking challenge that begins with a tall sprawling staircase to the top of “Diana’s Dune” where one can pause to gaze across the delicate, diverse rolling beauty of the dune succession and its fragility before continuing the hiking loop.

The Cuyahoga Valley National Park preserves and reclaims the rural landscape along the Cuyahoga River between Akron and Cleveland in Northeast Ohio. The 32,572-acre park is administered by the National Park Service, but within its boundaries are areas independently managed as county parks or as public or private businesses. Cuyahoga Valley differs from the other national parks in America in that it is adjacent to two large urban areas. The park is centered around the Cuyahoga River which became a national icon after a famous fire in 1969 galvanized the environmental movement and helped lead to the establishment of the Environmental Protection Agency. The story of the river is a powerful metaphor for the challenges of reversing environmental damage. The 100-mile river flows both south and north before emptying into Lake Erie at Cleveland, Ohio, a scant 30 miles west of its headwaters. This U-shaped path is due to the river’s geologic history. As melting glaciers retreated from the last ice age, their waters tried to find their way to Lake Erie. They wandered south until they hit a north-south continental divide. At what is now Akron, they turned sharply north and burrowed into an ancient river bed filled with glacial debris. Native Americans called it “Ka-ih-ogh-ha”—crooked. The river was unsuitable for transportation, but its water could be used to create a navigable canal. The Ohio & Erie Canal opened in 1827, bringing rapid industrialization to Northeast Ohio and the river began to be used to transport industrial waste and urban sewage. The Cuyahoga became famous as “the river that burned” after a June 22, 1969 fire that began when a spark from a passing train ignited the debris and the oil floating on the water. The fire became a rallying cry for America to protect its waterways. The river underwent a series of restoration efforts, and has made a comeback, becoming a state scenic river in 1974. Once a source of shame, the Cuyahoga is now an inspiration, demonstrating how people can heal a damaged river. Today people are enjoying the return of nesting bald eagles and other wildlife as well as new recreational opportunities along the Cuyahoga River Water Trail.

The Allegheny National Forest, in northwestern Pennsylvania, covers 513,175 acres in the heart of Pennsylvania’s oil and gas region. Established in 1923, it is Pennsylvania’s only National Forest. The forest is composed of plateau tops with elevations up to approximately 2,300 feet and valleys down to approximately 1,000 feet above sea level, situated in the foothills of the Appalachian mountains. Famous for its beautiful scenery and expansive natural surroundings, this area is often referred to as “Trail Central,” as there are more than 600 miles of pathways traversing over 500,000 acres available for outdoor activities including hiking, mountain biking, OHV trails, canoeing, guided tours, kayaking, bird watching and more. The Allegheny National Forest was originally home to Native Americans, who lived on the land for centuries. The area’s beauty attracted early European settlers in the 1800s who eventually created a thriving community, and transformed the area into a hub for lumber and agriculture. Over the years, the region was further developed, as tanneries and sawmills became profitable businesses. Later, coal mining emerged as a lucrative industry and mines were created across the region. At that point, the railroad made this part of the state more accessible, though it also resulted in this area of Pennsylvania losing almost all of its natural resources, as trees were cut down and large sections of lands were completely cleared. In 1923, the United States government established the Allegheny National Forest, which fully protected the land and still promotes conservation. Today, it’s one of the most visited destinations in the state, known for its jaw-dropping natural beauty and acres of pristine land.